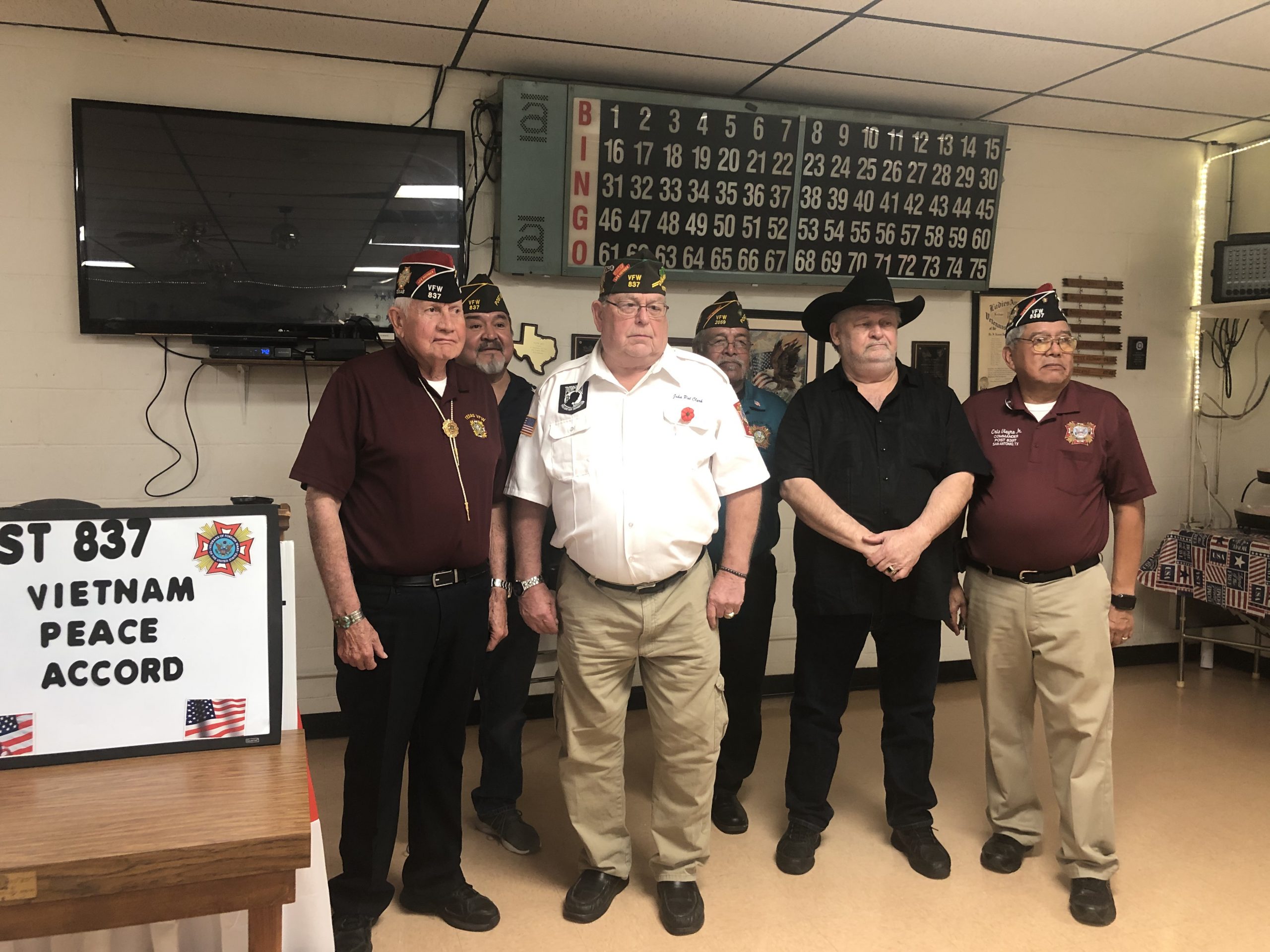 Last evening (January 27, 2020) my lovely bride and I had the honor of attending a Vietnam Peace Accord ceremony hosted by Veterans of Foreign Wars of the United States Post 837 in San Antonio. The colors were presented by the South San Antonio Calvary Color Guard and the National Anthem and  wonderful patriotic music was played by clarinetists Joanie Munsler. After opening prayer and Pledge of Allegiance, Post Commander John Rodriquez presented a history of the signing of the Vietnam Peace Accord.

Commander Rodriquez then introduced VFW Post 8397 (R. E. l. Bob Willie Post) Commander Crisofo (Chris) Vieja, who in turn presented a short ceremony to welcome home the Vietnam Members present.  Chris was a US Marine who served this great Nation in the Republic of Vietnam in 1967-68. His story was gripping and served as a vivid reminder of the horrors and ravages of war. But the bigger war he experienced was the homecoming and the treatment our soldiers had to endure post-Vietnam.  As I sat there, his commentary sparked the long-forgotten memories and vivid images of the experiences we were exposed to during that period. I mentioned, forgotten memories, but does one really forget, I tend to think not, we just began adept as compartmenting the memories that caused us stress and trauma.

What rekindled the past was Chris’s summation of the TET Offensive and the number of casualties we suffered during that period.  The TET Offensive started during the celebration of the Lunar New Year. TET is the most important holiday in Vietnam.  The TET Offensive was a coordinated attack on many cities and military outposts in country, which in theory was an all-out attempt to foment rebellion among the South Vietnamese population and encourage the United States to scale back its involvement in the Vietnam war. The North Vietnamese Commander General Vo Nguyen Giap, launched the attacks in the early hours of 31 January 1968. His feelings were that the attack would cause the Vietnam armed forces to collapse.  The results were devastating and horrendous, however, I do believe he underestimated the strength and resolve of the American Soldier. In the end both sides claimed victory.

I still vividly recall that night of 31 January 1968 as if it happened yesterday.  I was stationed at Bien Hoa Air Base, not too far from Saigon and virtually next door to Long Bien, the largest army installation in the country at the time.  Rockets and mortars came screaming in and the impact was thunderous. We immediately jumped into action and started retrieving and treating our wounded.  These attacks almost became a daily occurrence, we here rocketed or mortared most nights and sometimes during the day.  The sound of the warning siren became embedded in my memory, even to this day, when a siren on base goes off, my reflexes tend to have me looking for a place to escape or seek shelter.

I have come to the conclusion that this will never go away, and the harrowing memories will always be with me. So, I lock them away as best I can. In the end, my recollections are probably very small compared to those of Commander Chris Vieya, a US Marine who was right in the middle of many of the big skirmishes. Those times are hard to imagine, but if you were there, you fully understand the full impact war has on our soldiers and families. I don’t know if I consider myself lucky, but I guess I should, I was stationed overseas for 5 years after Vietnam, so I never experienced the vicious and disgraceful treatment of our military men and women when they came home. But I can imagine how they felt; just hearing the stories make me cringe, so, I reach out to any Vietnam veteran and welcome you home and thank you for your patriotism and service.

A Poem For Flag Day